I live in Richmond Victoria, a street from where some of the violent protests occurred yesterday, once street away from some disturbing footage you can see in this video:

The Herald Sun has run story after story about the lockdowns, personalising attacks agains the premier. They preference appears to be for opinion, to encourage a set of views, more so than reporting. You only have to see today’s front page to see that in action. 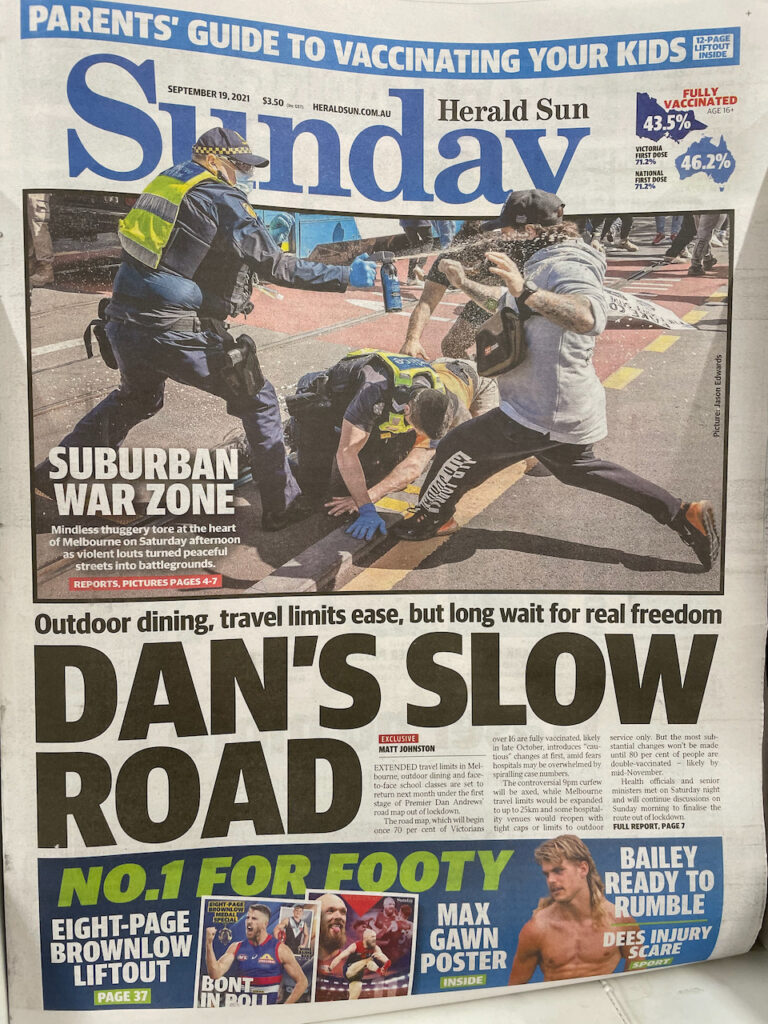 This front page story, Dan’s slow road, is not journalism. The so-called slow road is the road agreed by national cabinet – but there’s no reference to that on the front page.

I am angry at the personal risk I and my neighbours faced yesterday. While the major confrontations were one street away, there were protestors on my street, as well as police. There were also helicopters directly overhead. It was a tense few hours.

The coffee shop I go to had hundreds of protestors outside, closing with police. I can only imaging how they felt.

The actions of the protestors effectively caused us to be barricaded in for the day given how the local streets were barricaded.

I am tired of selling this nonsense published baby News Corp., tired that their newspapers are no longer newspapers, that they are political lobbying pamphlets.

I support free speech. But to dress this up as front page news is ridiculous. News Corp. should focus on news on the front page and restrict opinion peddling to their opinion pages – and they should label them as such.

Footnote: the protest was in Richmond because the police decided to stop the trains at my local station. This decision caused the city planned protest to relocate to my suburb. I would like to understand why the police thought shifting a protest from an empty CBD to populated suburban streets was a good idea.