UK artworks publisher Eaglemoss has decided to supply the Doctor Who part series from issue 201 on direct to customers in Australia. The decision was announced in a letter to collectors. 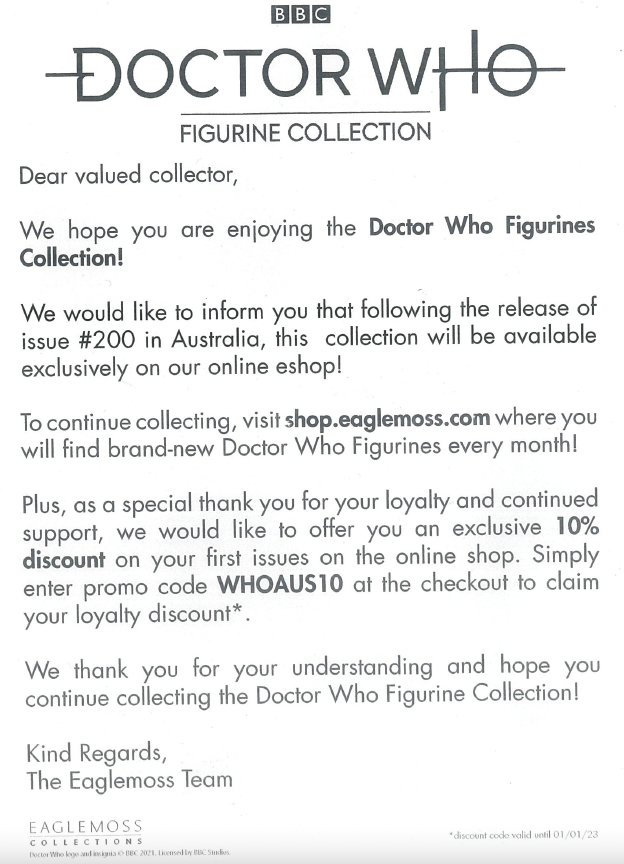 Eaglemoss has not written to newsagents thanking them for their years of loyal service.

I reached out to the company through a couple of social media platforms querying the decision and received no response.

Eaglemoss has consistently failed to provide newsagents reasonable supply of artworks titles, so I wonder how they will go at providing their direct customers with product. Given their lacklustre customer service, I wonder how Australian subscribers will fare. There is no evidence to suggest it will go well.

It is disappointing the artworks experts at Are Direct were unable to retain previous distribution arrangements for newsagents. I wonder what their take is on the decision? Maybe I missed an announcement from them on this.

Is this the end of artworks in Australian newsagencies? It’s hard to say. But, the future is not bright. That won’t bother plenty who gave up on artworks after years and years of supply failures and the ever present competiton of sweet direct subscription deals.

To some us, however, artworks have been terrific traffic generators that we have sought to leverage into other opportunities. I have written about this plenty of times here. While their value has waned in the years since the closure of the Bissett business, a good part series was one I’d always engage with – primarily because of the TV campaign that specifically tagged our channel. It was the one time we were exclusively named in a TVC.

It will be interesting to see how this plays out.

Of course, this decision plays into a narrative about magazines, which is challenging to avoid. The problem is, we have big business vested interests who are unlikely to engage in genuinely transparent dialogue on the topic.